Partners in Print: Artistic Collaboration and the Ukiyo-e Market 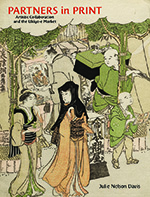 This compelling account of collaboration in the genre of ukiyo-e (pictures of the floating world) offers a new approach to understanding the production and reception of print culture in early modern Japan. It provides a corrective to the perception that the ukiyo-e tradition was the product of the creative talents of individual artists, revealing instead the many identities that made and disseminated printed work. Julie Nelson Davis demonstrates by way of examples from the later eighteenth century that this popular genre was the result of an exchange among publishers, designers, writers, carvers, printers, patrons, buyers, and readers. By recasting these works as examples of a network of commercial and artistic cooperation, she offers a nuanced view of the complexity of this tradition and expands our understanding of the dynamic processes of production, reception, and intention in floating world print culture.

Four case studies give evidence of what constituted modes of collaboration among artistic producers in the period. In each case Davis explores a different configuration of collaboration: that between a teacher and a student, two painters and their publishers, a designer and a publisher, and a writer and an illustrator. Each investigates a mode of partnership through a single work: a specially commissioned print, a lavishly illustrated album, a printed handscroll, and an inexpensive illustrated novel. These case studies explore the diversity of printed things in the period ranging from expensive works made for a select circle of connoisseurs to those meant to be sold at a modest price to a large audience. They take up familiar subjects from the floating world—connoisseurship, beauty, sex, and humor—and explore multiple dimensions of inquiry vital to that dynamic culture: the status of art, the evaluation of beauty, the representation of sexuality, and the tension between mind and body.

Where earlier studies of woodblock prints have tended to focus on the individual artist, Partners in Print takes the subject a major step forward to a richer picture of the creative process. Placing these works in their period context not only reveals an aesthetic network responsive to and shaped by the desires of consumers in a specific place and time, but also contributes to a larger discussion about the role of art and the place of the material text in the early modern world.

Davis (art historian, Univ. of Pennsylvania) presents an extremely thorough study of an example of four different genres of Japanese prints from the Tokugawa period, based on “artistic collaboration.” Standard such “collaboration” includes designer, block cutter, and publisher, but Davis penetrates much further adding writer, printer, imitators, patrons, buyers, and audiences. In the process she ferrets out minute details that result in a very complex study of the “Floating World” encompassing the printed image from inspiration and creation to use and aesthetics. The introduction carefully outlines the four different print genres that are elaborately analyzed in four separate chapters: "Teaching the Art of Painting through Print," "Picturing Beauties," "Unrolling Pictures for the Erotic Imagination," and "Making Dogma into Comedy." A concluding chapter encompasses the book’s perspectives on the Japanese print with a discussion of a 19th-century publication by Shikitei Sanba, Twice-Baked Princess Pot-on-Her-Head, that includes a history of Ukiyo-e publishers, writers, and designers from their beginnings to 1802.

There are 101 illustrations, list of works cited, and 25 pages of notes. Summing Up: Highly recommended. Upper-division undergraduate through faculty; professionals.