Fashioning Defense: Armor, Body, and Self in the Early Modern World

Fashioning Defense: Armor, Body, and Self in the Early Modern World 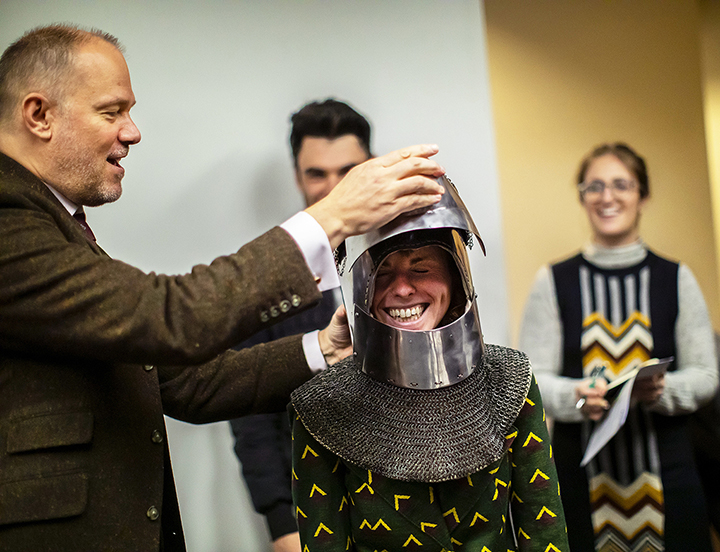 A gauntlet. A helmet. A cuisse. These are some of the pieces that students who participated in the Mellon Object Study workshop on November 22, 2019, were allowed to try on their own bodies to experience the burdensome weight, restricted movements, and sensory deprivations that accompany the wearing of armor. Focusing on the sixteenth century, when the fashion for armor changed radically from pointed to rounded forms and the armored body’s silhouette, this workshop introduced students to the commissioning, manufacture, fitting, collecting, conservation, and display of armor by offering hands-on interaction with samples from the Philadelphia Museum of Art. After a visit to discuss the presentation of armor in the public galleries, within the space of the study room, students were given the opportunity to experience fundamentals of armor that are remote to museum visitors who ordinarily have recourse only to armor’s visible aspects. Building on readings that were both technically and theoretically oriented, Prof. Shira Brisman and Dirk Breiding, J.J. Medveckis Associate Curator of Arms and Armor at the Philadelphia Museum of Art, led students in discussions that centered around armor’s mediation between ease of wear, protectiveness, and flare. Special attention was dedicated to the techniques of etching designs into armor—iconographies that range from pious to protective to downright lude. One of the outcomes of the workshop was that students learned that sets of armor on display in museums are not often what they seem: forgeries abound in this medium as in other media, and sometimes missing parts are commissioned by later collectors to fill in an entire suit.