The Chora Monastery and the World of Late Byzantium

The Chora Monastery and the World of Late Byzantium 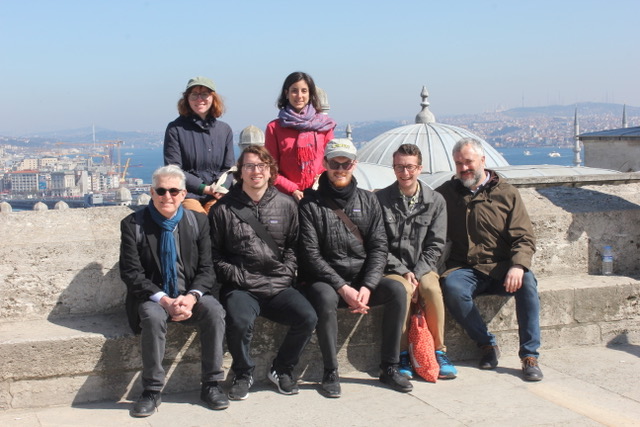 The Chora seminar on the terrace of the Süleymaniye Mosque in Istanbul.

In early March 2020, just under the gun of the pandemic shutdown, Professors Robert Ousterhout and Ivan Drpić took six graduate students to Istanbul as part of a seminar, entitled "The Chora Monastery and the World of Late Byzantium." It was a wide-ranging exploration of the art and culture of the Late Byzantine period (thirteenth through fifteenth century), with focus upon a key monument, the church of the former Chora monastery (Kariye Camii or Kariye Museum) in Istanbul. With its superb and highly original architecture, this church preserves an outstanding ensemble of monumental mosaics, frescoes, stone carvings, funerary monuments, colored marbles and glass, and inscriptions. Additionally, substantial body of texts illuminates various aspects of the monastery’s history and, in particular, its restoration in the early fourteenth century by the statesman and scholar Theodore Metochites.

The 8-day visit to Istanbul afforded the Penn students and instructors a unique opportunity to examine the materiality of Late Byzantine art close at hand and in situ.  They began by attending liturgy at the Greek Orthodox Patriarchate (the Sunday Feast of Orthodoxy, officiated by ten concelebrating bishops all carrying icons).  In subsequent days, they visited the Chora Monastery, where they were afforded the opportunity to see parts of the building closed to the public and to examine the impressive 14th-c. mosaics and frescoes close at hand from the scaffoldings.  Here, and at several other sites, the students met and conversed with the team of conservators working on the restoration of the architecture, mosaics, and paintings.  The instructors also arranged behind the scenes visits to ongoing conservation work and excavations at the Fethiye Camii and Vefa Kilise Camii (both 14th century), where students viewed the mosaics and conservation work close-up from the scaffoldings and met the conservators.  The class also toured recently completed restorations of architecture and frescoes at the Fenari Isa Camii (late 13th c.), the Zeyrek Camii (12th c.), the Tekfur Palace (late 13th c.), St. Euphemia museum (late 13th c., closed but with special arrangements), and the class also visited Hagia Sophia, the Archaeological Museum (closed but with special arrangements to see the “Istanbul through the Ages” galleries), the Gül Camii (12th c.), the Kalenderhane Camii (12-13th centuries), as well as several smaller Byzantine buildings and early Ottoman mosques.  The trip concluded with a behind-the-scenes visit to the Pera Museum, followed by tea and conversation with local Byzantine specialists and graduate students in the museum cafe.  Among the leading scholars in Turkey who contributed to the discussions were Nevra Necipoğlu (Boğaziçi University), Tolga Uyar (Boğaziçi University), and Ivana Jevtić (Koç University).