The Unfinished Exhibition: Visualizing Myth, Memory, and the Shadow of the Civil War in Centennial America 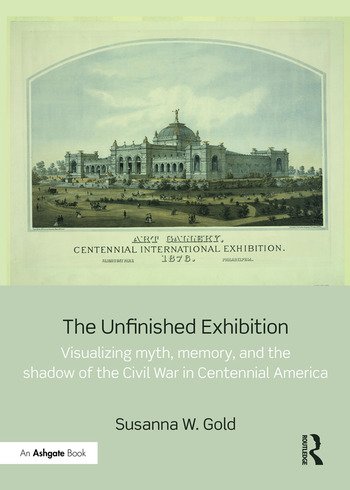 The Centennial decade was an era of ambivalence, the United States still unresolved about the incomprehensible damage it had wrought over four years of Civil War, and why. Philadelphia’s 1876 Centennial Exhibition -- a spectacular international event celebrating one hundred years of American strength, unity, and freedom -- took place in the immediate wake of this trauma of war and the failures of Reconstruction as a means to restore power and patriotism in the nation’s struggle to rebuild itself. The Unfinished Exhibition, the first comprehensive examination of American art at the Centennial, explains the critical role of visual culture in negotiating memories of the nation’s past that conflicted with the optimism that Exhibition officials promoted. Supporting novel iconographical interpretations with myriad primary source material, author Susanna W. Gold demonstrates how the art galleries and the audiences who visited them addressed the lingering traumas of battle, the uneasy re-unification of North and South, and the persisting racial tensions in the post-Emancipation era. This careful consideration of the visual record exposes the complexities of the war’s impact on Americans and clarifies how the Centennial art exhibition affected a nation still finding its direction at a critical moment in its history.