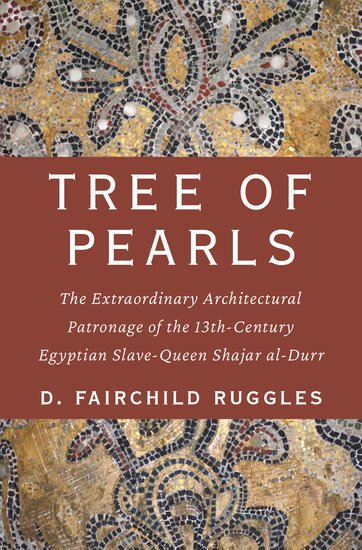 Shajar al-Durr--known as "Tree of Pearls"--began her remarkable career as a child slave, given as property to the Ayyubid Sultan Salih of Egypt. She became his favorite concubine, was manumitted, became the sultan's wife, served as governing regent, and ultimately rose to become the legitimately appointed sultan of Egypt in 1250 after her husband's death. Shajar al-Durr used her wealth and power to add a tomb to his urban madrasa; with this innovation, madrasas and many other charitably endowed architectural complexes became commemorative monuments, a practice that remains widespread today. A highly unusual case of a Muslim woman authorized to rule in her own name, her reign ended after only three months when she was forced to share her governance with an army general from the ranks of the Mamluks (elite slave soldiers) and for political expediency to marry him.

Despite the fact that Shajar al-Durr's story ends tragically with her assassination and hasty burial, her deeds in her lifetime offer a stark alternative to the continued belief that women in the medieval period were unseen, anonymous, and inconsequential in a world that belonged to men. This biography--the first ever in English--will place the rise and fall of the sultan-queen in the wider context of the cultural and architectural development of Cairo, the city that still holds one of the largest and most important collections of Islamic monuments in the world. D. Fairchild Ruggles also situates the queen's extraordinary architectural patronage in relation to other women of her own time, such as Aleppo's Ayyubid regent. Tree of Pearls concludes with a lively discussion of what we can know about the material impact of women of both high and lesser social rank in this period, and why their impact matters in the writing of history.