The Pennsylvania Academy and the Expanding Audience for Art 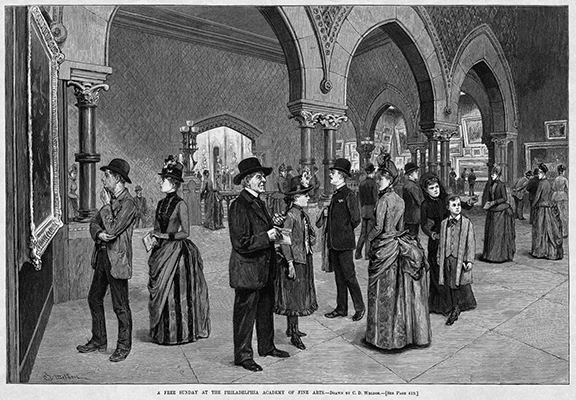 For fall term 2015 the Pennsylvania Academy of the Fine Arts (PAFA), one of the oldest museums in the country, invited a group of Penn students to get creative with its extensive collection of American art.  The 13 participants in Michael Leja’s curatorial seminar (four undergrad and nine grad, including students from Haverford, Swarthmore, and the University of Delaware) did just that.  They began organizing an exhibition titled “Expanding the Audience for Art at the Pennsylvania Academy of the Fine Arts,” (April 8-July 31, 2016) which explored the many ways that students, faculty, and directors associated with PAFA sought to enlarge the population engaging the visual arts in the nineteenth and early twentieth centuries.  To some extent this was a matter of adapting fine art traditions to new media, venues, and formats capable of wide appeal and distribution.  It also entailed attracting women, African Americans, and Asian Americans as students for the Academy’s classes and as viewers for its exhibitions.  Institutional initiatives—such as enlarging the curriculum, redesigning exhibition galleries, and energetically publicizing its activities—were also part of the story. Students in the seminar identified particular themes and works of art for study, and spent many hours in the PAFA archives and in the registrar’s office, where object files are maintained.  Each student wrote a short essay presenting original research for the exhibition catalogue.  Organized into teams, they composed wall labels and other didactic materials for the galleries.