Modernism as Memory: Building Identity in the Federal Republic of Germany 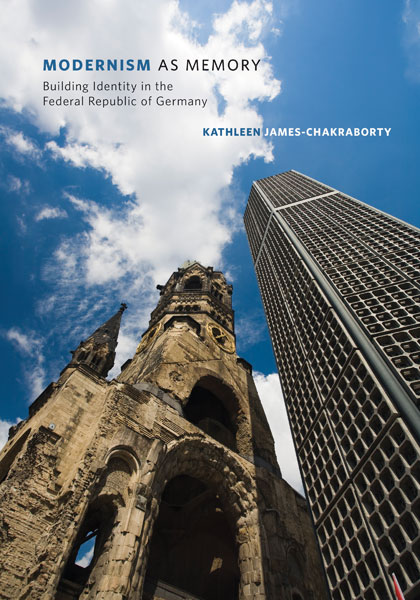 After World War II, West Germans and West Berliners found ways of communicating both their recent sufferings and aspirations for stable communities through buildings that fused the ruins of historicist structures with new constructions rooted in the modernism of the 1910s and ‘20s. As Modernism as Memory illustrates, these postwar practices undergird the approaches later taken in influential structures created or renovated in Berlin following the fall of the Wall, including the Jewish Museum and the Reichstag, the New Museum and the Topography of Terror.

While others have characterized contemporary Berlin’s museums and memorials as postmodern, Kathleen James-Chakraborty argues that these environments are examples of an “architecture of modern memory” that is much older, more complex, and historically contingent. She reveals that churches and museums repaired and designed before 1989 in Düren, Hanover, Munich, Neviges, Pforzheim, Stuttgart, and Weil am Rhein contributed to a modernist precedent for the relationship between German identity and the past developed since then in the Ruhr region and in Berlin.

Modernism as Memory demonstrates that how one remembers can be detached from what one remembers, contrasting ruins with recollections of modernism to commemorate German suffering, the Holocaust, and the industrial revolution, as well as new spaces for Islam in the country.