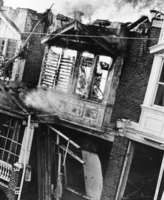 The year was 1987. Ronald Reagan was midway through his second term. W. Wilson Goode was serving his first term as the first black mayor of the city of Philadelphia. Spike Lee’s She’s Gotta Have It had been released a year earlier; the first episode of Eyes on the Prize, a groundbreaking television se- ries about the history of the civil rights movement, had pre- miered in January, and at 10 pm on February 24, The Bombing of Osage Avenue was broadcast nationally on PBS.